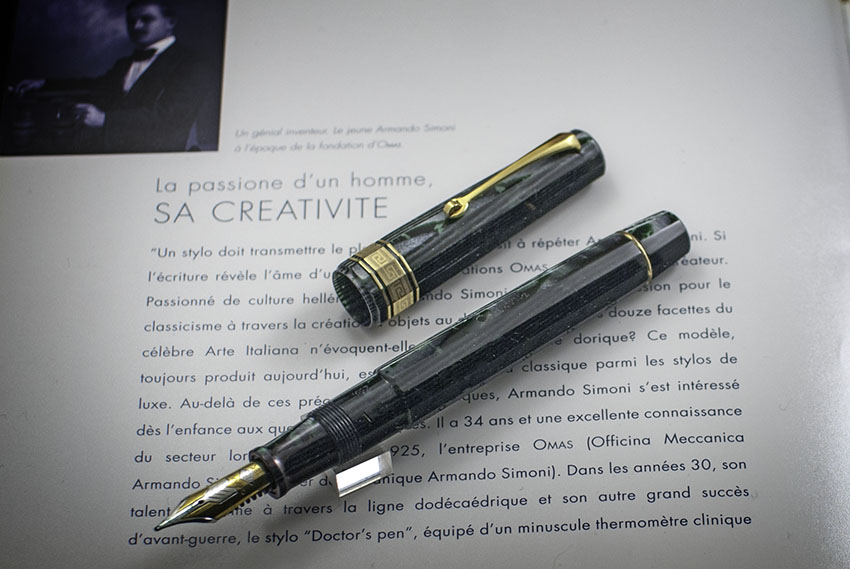 Yes, my pens are like good friends to me, as are the people I have met at the various pen companies that I have toured. It was in 2007 that I made arrangements to meet with the folks at OMAS pen in Bologna. It was the first of the Italian pen company visits. I can remember the visit as if it was yesterday. So it was very sad to hear in February 2016 that OMAS would be closing.

Aug 2016 | At the end of this article, I will add an update that has become public.

The company has a proud history, having be founded in 1925 by Armando Sirmoni. It was his company alright, as he was responsible for the design of many of the tools and equipment used to create the OMAS pens.

I was interested in visit with OMAS as I had heard stories of how the production of the OMAS pens was a tightly kept secret. How no employees were involved with all aspects of the production, as if to keep the process held by very few. I can remember that as my wife and I took at cab to the factory wondering if we would actually see the shop floor, or would we be limited to a visit of the showroom.

Well, nothing was a secret. From the marketing manager to the General Manager, we were shown around all aspects of product and walked through the factory seeing the process from start to finish. From the design room, to pro-types, to the storeroom holding rods of resin, to the celluloid stored outside the building, we saw it all. I recall the pride of the people of OMAS in their product.

An Italian company with a long history, in 2000 the LVMH Group (Moet Hennessy Louis Vuitton, acquired OMAS as part of their group of high-end brands. Within months of my visit, OMAS was acquired (owning 90% equity) by the Xinyu Hengdeli of Hong Kong. I contacted the folks at OMAS to check on the impact of the change. There was at the time a very positive feeling as the acquisition was part of a strategic marketing to gain access to the luxury goods market of Asia. But, as I would find over the course of the next few years, some of the management of OMAS I had previously met would leave the company. Those were the names of the companies indicated in the original press release. I believe over the course of the following years, some of the company names changed. For example, it is the Hong Kong company, Oluxe Holdings Limited that most recently listed OMAS as one of their businesses.

As stated in the Oluxe 2015 Annual Report: "To further consolidate the business, the Group decided to close down the underperforming manufacturing business of “OMAS” in Italy in November 2015." Further the report notes: "Subsequent to 30 September 2015, the Group ceased to provide financial support to its subsidiary, OMAS. Because of insolvency, OMAS ceased its operation and on 17 November 2015, a resolution was passed by the shareholder of OMAS to get OMAS dissolved and liquidated on 1 December 2015, details of the financial impact are set out in note 44." So decision to dissolve OMAS has been made a number of months ago.

In February the news came out that OMAS would not be sold. There were references being made that there were interested parties in buying OMAS. But, it is now closed and Oluxe retains ownership of the OMAS name.

Will there be a "Chinese OMAS pen"? Who knows, other companies have closed with the brand being re-introduced to the market. But in this case, the not being made in Italy, but the craftsmen of that factory, the pens will not be the same.

For me, this is saying good bye to friends. I remember the people I met at OMAS. Over the course of the years since my visit I have written and been updated on marketing trends form the company, and of course, my closest friends, have been by OMAS fountain pens themselves.

On my 2007 visit, Christophe Artaux, the Chief Executive Officer of OMAS at the time, invited us to meet him in his office. After the change of ownership, he left as the CEO of OMAS and took on the role of Managing Director for LVMH for their watch and jewelery line. From there to leadership roles for Dom Perignon, and then with HUBLOT. But I remember our visit very well. It was no rushed event to have the visitors in and out as quickly as possible. He spent time with us talking about OMAS, how he had led the update to the brand. Yes, the change from the classic old OMAS Paragon and 360 to a new modern line. I remember how we explained that as popular as the classic lines were, they had to be updated. I remember the pride in the explaining of the modern "O" in the OMAS name that would be found on the new lines of pens.

I was presented with an engraved OMAS Arte Italiana Milord fountain pen. I use it on a regular basis. It looks as good today as it when I opened the box, in their factory, back in 2007.

Once the news came out of the closing of OMAS I started my celebration: it was an different OMAS pen each day taken to work, to use an enjoy. As each say when I could clean, polish with a cloth and put the pen in a pen case to take the work, it was was getting acquainted again with an old friend. So while the company may close, I will still have my friendship with the OMAS pens I own.

At the end of July 2016 it was announced on the Fountain Pen Network that a group has reach an agreement and purchased all of OMAS stocks/materials to remake the superb celluloid pens that were manufactured by OMAS. The group had originally planned to operate an an on-line store, but that has never taken place.

I toured the OMAS factory back in 2007. It was one my first of the first Italian pen companies.

I think I almost passed out when I walked by what appeared to be endless rolls of gold nibs.

OMAS took quality seriously, with the pens have a nib check under a magnify class.

My Visit with OMAS

My Pens of Note